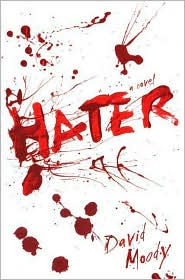 Spent the weekend running TONS of errands with #2 son. Including a trip to Barns and Noble. Picked up Graceling, Cracked Up to Be, Kitty Raises Hell (except I just realized I need Kitty and the Dead Man’s Hand), Hater (GOD I love that cover), and Lord of Misrule by Rachel Caine… oh and a book for the kid–actually he picked up Graceling so technically, he got two, but I already read Graceling LOL.

Ended up reading Cracked up to Be Saturday night–it’s a contemporary YA and it was pretty good. I was kind of disappointed in the ending (Honestly, I felt a wee bit cheated because we didn’t get to see the crisis first-hand, only after the fact and after all that build-up it was a bit of a let-down). That said, it was very well written!

Graceling, on the other hand, knocked my socks off–and seriously, go check out the cover. I started at noon and between four loads of laundry, grocery shopping, & cooking dinner, I finished up about 8 last night.

Here’s the blurb (though I don’t think it’ s a very good one): In the course of her dark and eventful tale, Cashore plays with the idea of awkwardness, how at a certain age gifts and talents are burdens, how they make it impossible to feel comfortable in the world. And in this she writes a fairly realistic portrait of teenage life into the baroque courts of her outlandish kingdomsâ€¦In many respects Graceling is a study of mysterious angers: it offers a perfect parable of adolescence, as its characters struggle with turbulent emotions they must learn to control. The consequences are more tangible than they usually are in more mundane settingsâ€”if Katsa loses control, she breaks someone’s jaw by accidentâ€”but the principle is the same. The teenage characters in this novel, like some we may know in life, grow into their graces. They realize that their monstrous individuality is not so monstrous after all.

No more free reading for me. I have to finish my RITA books this week!

I also made my first attempt at baking some gluten free/wheat free bread. Apparently, I’m allergic to something in regular bread. Store bought doesn’t bother me but I don’t eat that much. Homemade…I usually devour because, you know, it’s hot, it’s fresh and it’s got melty butter on it! Then two days later, I end up looking like someone took a red marker to my face. And it itches.

So I got some rice flour and oat bran and gave it a whirl. Today my face is a little red but not much more than normal. AND it doesn’t itch. We’ll see how it goes.

Anyway, it wasn’t BAD but it wasn’t GREAT bread. It did taste a lot like regular bread but was kind of dense (the texture wasn’t too different from real bread) and dry on the outside. I guess it was like a real crust…but not LOL. It didn’t rise much either!

I think next time I’ll try it in a bread pan instead of on the bread stone….maybe add some ground flax seed.Â  So here’s what I tried-if you have any tips/tricks for me, throw em out there!

about 2 cups of warm water

Mix 1 cup warm water with yeast, add sugar and salt and let set about 10 mintes to proof. Mix all the dry ingregients together.Â  Beat olive oil and one egg. Add wet and dry ingredients together.

Sprinkle another 1/2 cup of brown rice flour on counter and knead dough. Sit in warm place and let rise (it’s supposed to double but honestly it didn’t). I probably should have baked at this point but I didn’t. Instead i punched it down and kneaded again and tried to let it rise again. It didn’t very much. I baked for about 45 minutes at 350 on my breadstone (sprinkled with corn meal)