I’m chatting goals (and bitching a little) at SFC today.

I wrote five pages yesterday then realized this morning that teh story should go in a different direction and I was going to have to delete them. *sigh* On the good news front, the kids are taking off in about two hours and will be gone overnight (at least) so I have lots of writing time ahead of me, and a quiet new year!

I’m over at NAS talking resolutions and stuff we should resolve NOT to do!

Here’s a rough breakdown for you:

So did you keep track? how’d you do? And what are your plans for NYE?

Yesterday it was 77 degrees here. NO I’m not making that up. The temp just dropped like ten degrees and it’s supposed to rain all morning. The house is quiet, the baking is half gone, the kids are totally gone, and I have to go to East Texas this afternoon for one more Christmas 🙁

While I love my family I do NOT love the 2 hour drive.

Due to poor planning on my part, all we had to eat in the house for Christmas was leftover smoked turkey. The kids revolted. I told them EVERYTHING is closed. They insisted i call Quiznos and then Dominoes. No answer, so we got in the car and drove around. I told them if I didn’t find anything, I’d take them to Quik Trip and get them some 2/2.00 taquitos.Â  Our favorite Chinese restaurant was open so we SCORED!Â  Then we hit QT for coffee and smokes and soda (cuz it’s Christmas), and then, the car wouldn’t start.

So there I was on Christmas night sitting outside QT PRAYING my car started. It finally did and first thing yesterday (well, noonish first thing) we headed off to the Saturn dealership. I’m 200 bucks poorer but I have a new ignition switch.

And I read almost all of the Outliers. I don’t normally read non-fiction but I have to say it’s really fascinating! (and really easy reading LOL). Here’s a short description……

In Outliers, Gladwell (The Tipping Point) once again proves masterful in a genre he essentially pioneeredâ€”the book that illuminates secret patterns behind everyday phenomena. His gift for spotting an intriguing mystery, luring the reader in, then gradually revealing his lessons in lucid prose, is on vivid display. Outliers begins with a provocative look at why certain five-year-old boys enjoy an advantage in ice hockey, and how these advantages accumulate over time. We learn what Bill Gates, the Beatles and Mozart had in common: along with talent and ambition, each enjoyed an unusual opportunity to intensively cultivate a skill that allowed them to rise above their peers. A detailed investigation of the unique culture and skills of Eastern European Jewish immigrants persuasively explains their rise in 20th-century New York, first in the garment trade and then in the legal profession. Through case studies ranging from Canadian junior hockey champions to the robber barons of the Gilded Age, from Asian math whizzes to software entrepreneurs to the rise of his own family in Jamaica, Gladwell tears down the myth of individual merit to explore how culture, circumstance, timing, birth and luck account for successâ€”and how historical legacies can hold others back despite ample individual gifts.

Then we hit the mall which nearly made me homicidal. So we left–really quick.

And OHHHHHHHHHH Yesterday I ordered a buttload (like 8) of books from bn.com (most for 3.99), which totally cheered me up!!! I used my gift cards and ended up spending only 10 bucks. Mostly stuff I’ve wanted and been meaning to get. And I still have a gift card to amazon.com to spend–woot!

Will try to post some of my Christmas recipes but I’ve got to go make some pound cake now.

How was your Christmas? Did Santa bring you what you wanted?

Here, talking about my children.

Here, talking about Holiday Cheer.
For your pleasure……not right. Just not right.

So, last Tuesday on The Biggest Loser, everyone burned some of their fat clothes. After reading this blog post at Raine’s, it got me to wondering…what would happen if I went out and burned all my old rejections?

Oh I know! I’d get audited by the IRS! LOL

That said, I do belive there’s something special about shedding things that can symbolically hold us back. Agree? Disagree?

One of my local radio stations does a segment called Get Over It. In the vein of today’s blog post at NAS, about TMI for writers, I invite you all to post (anonymously even) and tell someone to get over it and why.

Also, I’m thinking of doing a big book giveaway either in January (because I know everyone’s broke) or February (for Valentines Day and since I have a book coming out at the end of the month). If you’re interested, please hollar at me!

It was just a NUTSO weekend that started out with a leaky sink Friday night! But somehow or another I ended up w 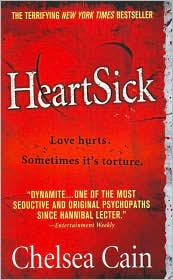 ith no kids on Saturday night *sigh* and got to sleep in late Sunday–except for the dogs.

I finally got the sink fixed Saturday morning, forgot to blog somewhere, ran all my errands and collapsed around 5. then got up at 8 to take #2 to a birthday party.

And stayed up to finish Chelsea Cain’s Heartsick. I really *really* loved this book. It’s very sparsely written, and that fits well with the graphic nature of the book. I didn’t QUITE buy the twist at the end but I was totally okay with it….and a warning for you romantic suspense fans: the only thing resembling a romance in this book is between Archie (the cop) andGretchen (the serial killer who nearly did him in).

We also *lost* the dogs Saturday–they snuck into the neighbor’s backyard. Then on Sunday we really did lose them…for 4.5 of the worst hours of my life. Luckily someone took them in.Â  They are fine. I’m still traumatized. AND of course, no writing on Sunday, no laundry, no cleaning so teh house looks like a bomb went off. All my good intentions out the window. I collapsed last night after dinner and watched the season finale of True Blood. If you saw it, what did you think?

I’m over at SFC today talking missed goals and new ones.

Head over to Charlene’s to read about when you’ll have time to write.

And then head to the Waxman Agency Blog to see what Agent Holly has to say about the Seven Deadly Sins of Publishing.

And I gobbled up finished Little Brother Saturday night, despite a HUGE case of book/writer envy. This was one of those books I read and thought/wished I’d written it because DAYUM it was that good. And also made for interesting reading after this conversation where Raine asked how much authors put of themselves in their work, and then this one where Jess Battis had this to ponder about the passage of Prop8, “How does this affect our writing, our worlds, our characters?Â  Do we have the obligation, as cultural actors, critics, writers, and artists, to protect civil rights and denounce discrimination?Â  Can we remain neutral?”.

Though the two conversations were a bit different, in relation to Little Brother, both conversations were eerily the same and here’s why (I don’t know Mr. Doctorow and I”m totally speculating here): As I read LB, it seemed as if Doctorow said, “Wow our world is kinda shitty right now….Hmmm how could I make it worse?” And then he did in a big way that totally succeeds.

Maybe Doctorow didn’t set out to write an “Issues” book, but LB is–and the issue is the world we live in/giving up our freedom and the true meaning of terror(I could go on and on but I’ll spare you). At the same time, it’s not a book that preaches to you…it’s entertaining, well written, a great story AND it totally makes you think. I firmly believe everyone over the age of 12 should be required to read this book because the scarriest thing about Little Brother is it’s high believability factor.

Hey!! I’m alive! After two days home with a sick child I”m finally back at work too. Over at SFC this week I’m asking whether we should bail out GM and over at NAS…you get to see pics of my new tattoo!! Also over at SFC today is guest-blogger Suzanne McMinn.

AND!!!!!! I hope you have a chance to pop over to The Blind Bet, a group project put together by two wonderful Cobblestone Press authors who asked me to participate. I’ll be blogging there later this week.

1.) Have you ever taken your clothes off for money?
Hmmm I guess that depends on your true views of dating LOL

3.) Do you take any kind of medication daily or regularly? If so, what?
Lord…yes. Thyroid, diabetes & Hormones because you know, my ass is getting old. I also take magnesium and omega 3’s every day

4.) Do you ever have naughty thoughts about any of your friends significant others?
Naughty-sexy? Or naughty-I-wish-you-would-die-and-i-would-never-piss-on-you-if-you-were-on-fire? Oh wait…I read that wrong. I don’t have a significant other. Heeh

7.) Have you ever seen a “donkey show“? Would you ever be interested in seeing one?
Um no but I once knew this Irish Setter…kidding!

How Weird Am I?

Linda Winfree is guesting over at SFC today! so stop by! Or else! Heeh

Okay so how weird am I? Raine just blogged about Jordan’s new release–Red–which I picked up this weekend. I’m about five chapters in and so far I’m really enjoying myself. There’s just one problem. I find, the better I know an author, the harder it is to read their book. That doens’t mean I don’t BUY them, I just have a hard time reading them. Just last week I bought Melissa Blue’s new book, and so far I’ve only read a few pages. I also have books by a slew of authors whom I call friend…sitting in my TBR pile *sigh*

Tonight, for dinner, we’re having Pioneer Woman’s Farfalle and Zucchini.…but I’m adding chicken!Â  And I”m making this little dandy for dessert! My mom used to have a similiar recipe but it asked for sour cream *drool* and I even bought a new sheet pan to make it in!